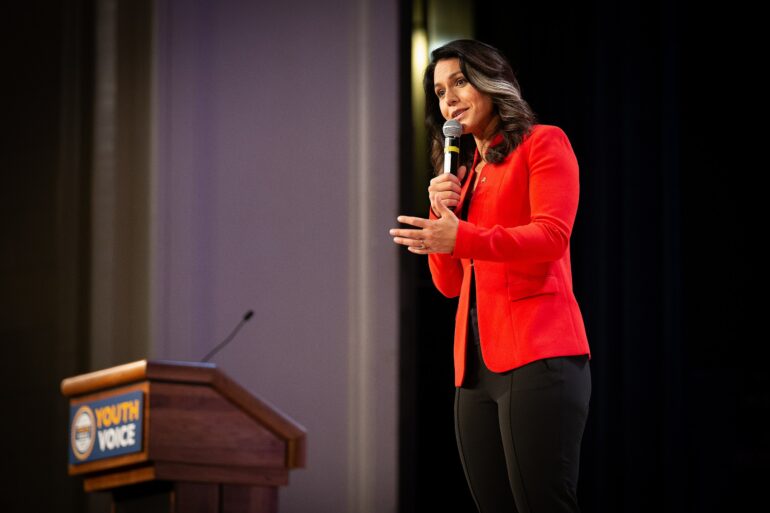 Tulsi Gabbard, who just announced her retirement from the Democratic Party, will campaign for rising MAGA star Kari Lake, who is running for governor of Arizona.

Gabbard, a former Hawaii representative, will participate at an Arizona Young Republican Engagement Forum in Chandler, Arizona, on Tuesday, according to Lake’s campaign.

The event, which begins at 7:30 p.m. local time, will also include Blake Masters, the GOP candidate for U.S. Senate, and Abe Hamadeh, Republican candidate for Arizona Attorney General.

Gabbard, who was vice chairwoman of the Democratic National Committee and campaigned for president in 2020, announced her departure from the Democratic Party last week.

During her announcement she went on to claim that the party was controlled by a “elitist cabal of warmongers.

Former President Donald Trump has also been a vocal backer of both Lake and Masters.

Lake is a former journalist who has built a name for herself by focusing on election integrity.

She is competing against Arizona Secretary of State Katie Hobbs, a Democrat.

Democrats are reportedly extremely concerned that Lake could pull off a come from behind win against Hobbs, and even potentially catapult herself to national relevance by the 2028 elections. Perhaps even landing a spot on a GOP Presidential ticket.

[READ MORE: GOP Candidate Responds After Being Attacked by Trump as a ‘RINO’]