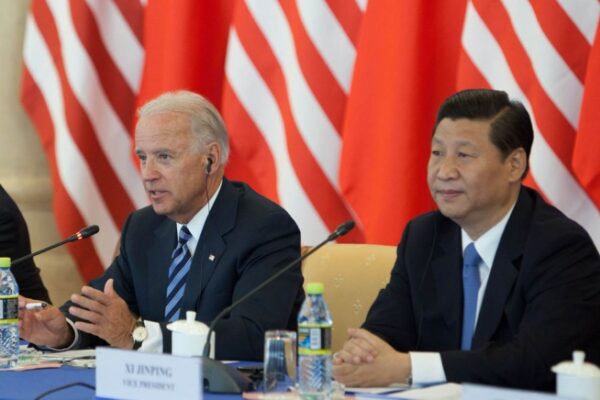 Vice President Joe Biden sits next to Chinese Vice President Xi a during the roundtable with US and Chinese business leaders at the Beijing Hotel in Beijing, China, August 19, 2011. Wikimedia Commons
NewsPoliticsWorld

The demand is a misunderstanding of market dynamics, but it might get his some brownie points among the Democrat base who seem to not understand simple economic principles either.

But China is paying attention.

A Chinese official took not of Biden’s attack on capitalism and praised the leader for it, The Daily Caller reports.

The original tweet was directed at companies running gas stations and demanded they change the prices at the pump to reflect the cost of fuel for them.

It is unclear if Biden knows what market prices companies are running gas stations pay.

However, another person took notice, one of the world’s richest men Jeff Bezos, who made his fortune understanding market economics.

The Biden administration has tried to link high gas prices to Russia’s war in Ukraine and greed from oil companies.

But a response to Bezos from Karine Jean-Pierre, Biden’s Press Secretary, proves that the administration still fails to grasp the situation.

But as entrepreneur Bill Perkins points out, this is wrong, “The rep for the highest office in the land should know that refinery output not crude oil input prices and global demand set the prices at the pump. To be this ignorant of such an important topic is just shocking. Or to be this mebdacious is just evil.”

Biden and his administration continue to prove why patriotism is at a low point in history on this Fourth of July.

[READ NEXT: Democrat Exposes Biden’s Lie About the Energy Crisis]