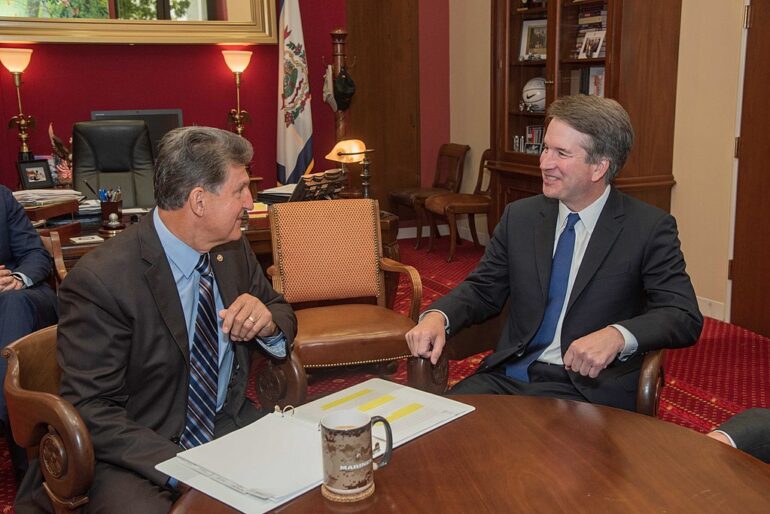 Over the last two weeks West Virginians have contacted me more than 8,000 times with their opinions on Judge Kavanaugh and the questions they have for him, and when I met with him today, I asked him several of their questions. [Photo Cred: Office of Senator Joe Manchin]
NewsOpinionPolitics

This Story Originally Appeared on The Daily Signal

If at first you don’t succeed … then amp up your intimidation tactics and go protest at a person’s home.

That seems to be the motto in recent years of leftist activists, who have increasingly targeted the private homes of lawmakers, White House officials, and Supreme Court justices.

“You don’t get to take away our bodily autonomy and enjoy your Saturday night at home,” said one protester Saturday, presumably infuriated over the leaked draft opinion that showed the Supreme Court poised to overturn Roe v. Wade.

Unfortunately, this is rapidly becoming the new normal for leftist activism. Here are eight examples of protests at private homes in recent years:

While he was acting secretary of the Department of Homeland Security, Wolf’s home was targeted by protesters multiple times.

“The ‘protest’ in front of my residence usually played out the same way. The protesters would organize roughly a quarter of a mile away and march through my neighborhood streets, holding up traffic, until they arrived in front of my house,” Wolf, who served in the Trump administration, wrote for The Daily Signal in 2021. “There they remained for an hour or more to shout through loudspeakers, again while holding up traffic.”

Wolf, who lives in a suburb of Washington, D.C., added that the protests led to him and his wife having “tough conversations with our two sons, who were both in middle school.”

He also noted that “this unwelcomed activity put me on edge, since such ‘protests’ can turn ugly quickly.”

On Jan. 4, 2021, Sen. Josh Hawley tweeted: “Tonight while I was in Missouri, Antifa scumbags came to our place in DC and threatened my wife and newborn daughter, who can’t travel. They screamed threats, vandalized, and tried to pound open our door.”

Hawley, a Republican who represents Missouri in the U.S. Senate, was being targeted for his views on the 2020 presidential election. According to Washingtonian magazine, at least one protester jeered, ““Hawley, Hawley, shame on you! Biden-Harris won through and through!”

During the protest, “a shadowy figure appeared in the sidelight of the front entrance and the door opened. It was not the senator but his wife, Erin, holding the couple’s seven-week-old baby in her arms,” Washingtonian reported, adding:

‘Could you cut it out, please?’ she asked, according to video footage of the protest. ‘We’ve got neighbors and a baby. Thank you,’ she said before retreating into the house.

Saturday night wasn’t the first time the Supreme Court justice had protesters outside his home. Last September, ShutDownDC, a leftist group that also was involved in the Wolf and Hawley protests, gathered a group to go to Kavanaugh’s house in a Maryland suburb.

At the time, Kavanaugh, along with Justices Clarence Thomas, Samuel Alito, Neil Gorsuch, and Amy Coney Barrett, had recently voted against hearing a case from pro-abortion advocates who were trying to stop Texas’ heartbeat law, which bans abortions after an unborn baby’s heartbeat can be detected, from going into effect.

“Make no mistake, what’s happening to reproductive justice and abortion rights is far bigger than one person,” ShutDownDC wrote, per Newsweek. “But Kavanaugh is playing a key role, and so far he’s been protected from any backlash. No more.”

Outside the home organizers said was Kavanaugh’s, “two people took to the pavement and scrawled ‘resign Kavanaugh’ and ‘my body, my choice,’ as a lineup of speakers criticized the Supreme Court for a decision they said was grounded in political partisanship,” reported WTOP-FM.

“A brief video posted on social media by a group calling itself ‘Smash Racism DC’ shows people standing outside a darkened home and chanting, ‘Tucker Carlson, we will fight. We know where you sleep at night,’” reported The Associated Press.

The incident was apparently terrifying for Carlson’s wife. The Washington Post reported:

‘I called my wife,’ Carlson told The Washington Post in a phone interview. ‘She had been in the kitchen alone getting ready to go to dinner and she heard pounding on the front door and screaming. … Someone started throwing himself against the front door and actually cracked the front door.’

His wife, thinking it was a home invasion, locked herself in the pantry and called 911, Carlson said.

The couple have four children, but none were home at the time.

In 2018, Kirstjen Nielsen, then secretary of the Department of Homeland Security, was targeted at her townhouse in a Virginia suburb.

“Several people stood along the sidewalk near her home with some holding signs. One demonstrator held a sign with Nielsen’s face on it featuring the words ‘child snatcher,’” reported WJLA-TV, an ABC affiliate.

Nielsen was under fire from liberals at the time over the Trump administration’s policies on illegal immigration.

Stephen Miller, a top adviser to President Donald Trump at the White House, also had his home targeted in 2018.

USA Today reported that a group of protesters “stood in front of Miller’s apartment building chanting ‘immigrants are welcome here.’”

It wasn’t the only time Miller’s apartment building was the target of protesters. Six months after the initial protest, a group called WERK for Peace held a dance party in front of Miller’s building.

“When the group got to Mr. Miller’s apartment building at CityCenterDC, Mr. [Firas] Nasr yelled from the street using a microphone and invited Mr. Miller to ‘come and dance with the migrants and refugees who are suffering at the expense of your policies,’” reported The Washington Times.

Leftist activists went to the Washington, D.C, home of Sen. Lindsey Graham, R-S.C., after Justice Ruth Bader Ginsburg died in 2020. Graham, who then chaired the Senate Judiciary Committee, had announced he was willing to move forward with replacing Ginsburg with a Trump nominee.

“On Monday morning, protesters and activists gathered outside the Washington, D.C., home of South Carolina Republican Senator Lindsey Graham to ‘wake him up’ with pots and pans, strobe lights and audio recordings,” reported KXAN-TV, an NBC affiliate based in Austin, Texas.

Graham wasn’t the only senator targeted by the left after Ginsburg’s death.

Sen. Mitch McConnell, then Senate majority leader, also had over 100 protesters show up at his home in Louisville, Kentucky, that fall.

“Protesters lined the streets … in front of the senator’s home in the Belknap neighborhood shortly after noon, chanting, ‘Hey hey, ho ho, Mitch McConnell has got to go’ and ‘vote him out’ as several passing drivers honked and waved support,” reported The Louisville Courier-Journal.

McConnell’s home in the nation’s capital was also targeted.

CBS affiliate WUSA-TV reported that “a group of youth climate activists headed to Sen. Mitch McConnell’s D.C. home in Northeast Thursday morning with a live GoGo band to hold a noise demonstration.” The station reported that “crowds spent their time chanting, giving speeches and making noise outside of McConnell’s home.”