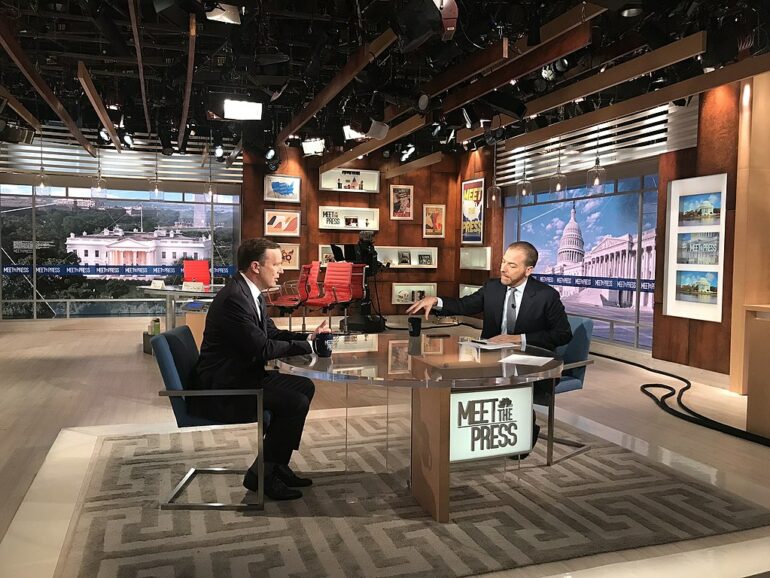 English: Tune in to @MeetThePress this morning. I'll be talking with @ChuckTodd about our ongoing background checks negotiations with the White House and the situation with Trump, Guiliani and Ukraine. [Photo Cred: United State Senate - the Office of Chris Murphy, Public domain, via Wikimedia Commons]
EntertainmentNews

NBC/MSNBC has made the decision to remove Chuck Todd from its cable line up and is move the host to its streaming service The Daily Caller reports.

Chuck Todd’s daily “Meet the Press” show is moving to a 4 pm slot from a 1 pm slot on the streaming service and will be rebranded “Meet the Press Now.”

IN addition to the show switch, a podcast will also be made in the name of the new streaming show.

CNN famously canceled its streaming service CNN+ soon after launch due to low numbers, but NBC doesn’t seem to be worried.

“NBC News is the leader in streaming news,” NBC News president Noah Oppenheim stated, according to THR, “Since our launch, we’ve been committed to delivering the best of NBC News’ journalism, free, to streaming audiences everywhere. Chuck was one of the first broadcast anchors to see the massive potential of streaming and bringing Meet the Press’s daily franchise to NBC News NOW reinforces the platform’s status as the destination for news on streaming.”

What is an NFT—and Why Are Some Worth So Much Money?

Todd will still host “Meet the Press” on Sunday mornings on NBC.

[READ NEXT: Fox Stars Get in a Fight]