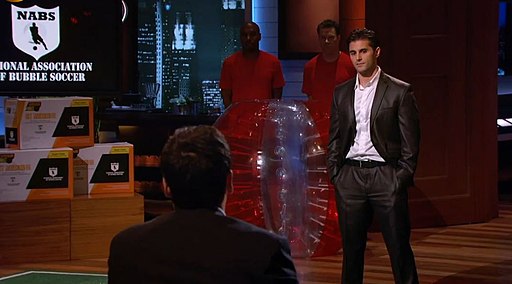 Whether watching the bidding war over Scrub Buddy or seeing them reject a product that you think will make millions, everyone who loves business knows about Shark Tank. Over 600 companies have received investments from The Sharks over nearly a decade and a half and some of them have become wildly successful.

Forbes tracked down the best of the best, writing, “Shark Tank’s celebrity investors have seen—and thrown their backing behind—everything from rentable Santa Claus performers and light-up beard ornaments to mini chainsaw turkey carvers and mushroom jerky. While many don’t go onto become household names beyond their 15 minutes of TV fame, there are some companies that managed to parlay their deals on the show into huge success. Forbes analyzed roughly 380 companies that left the tank with a deal in the past 6 years. We also poured through earlier Forbes reporting of another 319 businesses, scoured press reports and websites, and spoke to Shark Tank judges in search of the most successful. Of these dozens, seven stood out based on how much the businesses are worth, what their revenues are or how much they’ve grown since Shark Tank.

Some of the big winners are a bit surprising: four friends launched flushable wipes brand Dude Wipes out of their Chicago apartment in 2013, claiming to start it to “have fun, make shit jokes, and kick ass.” A year later, clever marketing got their brand featured on the butt of an MMA fighter and trending on Twitter. Today Dude Products, which claims to have been the number 2 stocking stuffer this holiday season, is expecting sales of $100 million for 2022. Husband-and-wife team Allison and Stephen Ellsworth started mixing fruit juice with cider vinegar in their kitchen to help with weight loss. Now their healthy Poppi soda brand has roughly $50 million in sales.

The most valuable Shark Tank-backed company ever, based on Forbes’ analysis, is Everly Health, a telehealth and diagnostic testing company that lets customers screen for everything from STDs to food sensitivities right in their homes. It raised $54 million at a more than $3 billion valuation in 2021, according to Pitchbook. It’s likely worth less now, given the market drop and jitters about unicorns, but still has bragging rights as the only unicorn that we found.

The founders of Kodiak Cakes, a line of whole grain and protein-packed pancake and waffle mixes, went on Shark Tank in season 5 looking for $500,000 in return for a 10% stake. They turned down Sharks’ offers that asked for 30% or more in equity, but still emerged as winners. The publicity from their 2014 TV appearance helped double sales that year to nearly $8 million. It raised outside money from Sunrise Strategic Partners in 2016, and by 2020, sales had reportedly jumped to $200 million. Kodiak Cakes, which now sells everything from granola bars and oatmeal to all sorts of flapjack mixes at retailers such as Target and Amazon, is ending 2022 with an estimated $500 million in retail sales, according to cofounder Cameron Smith.”

The most successful fish to get away from the sharks, however, might be Ring doorbells, or as it was known at the time: DoorBot. Geek Wire reported that “Shark Tank star Kevin O’Leary, aka ‘Mr. Wonderful,’ was blown away when he saw Amazon’s agreement to acquire video doorbell maker Ring for a reported price of more than $1 billion. ‘I couldn’t believe the price tag,’ he said on CNBC this week. ‘Unbelievable.’

Geek Wire continued: “Ring was known as DoorBot in 2013, when founder Jamie Siminoff pitched the product to O’Leary and other investors on the popular ABC show. Siminoff was seeking to raise $700,000 from the sharks at a $7 million valuation for the company, which had $1 million in annual sales at the time.

After the other sharks dropped out, O’Leary attempted one of his classic royalty deals, in combination with an initial $700,000 loan and a 5 percent equity stake. Siminoff, who had poked fun at O’Leary’s love of royalties in his opening pitch, rejected the deal and left without an investment.”

In an interview, again with Geek Wire, Siminoff was asked, “What does it mean to you that this company you first thought was worth $7 million, and you walked away empty-handed, rose to very significant valuations?”

He said, “I mean, obviously, I am a human being, so it is amazing to look back and to see those numbers, numbers I honestly never in my life, in my wildest dreams, ever thought I would achieve, but what really drove me was, I am an inventor, and I think the impact of the product, seeing it no matter where I drive around, what neighborhood it is. No matter where I travel, seeing the product, having people come up to me and say, “I use it,” that really is the impact that has most affected me in sort of the “wow” moments.

The money is a great scorecard or scoreboard and it’s obviously great on other things, but it really doesn’t drive you as a human to like what you want to do and that’s why the impact is what really got me.”

He also shared some great advice to entrepreneurs about pitching their company’s valuation after he so famously got rejected on national television.

Hold told business owners, “I think with valuation, the best thing is … a lot of times you ask someone, “Okay, it’s ten million dollars. Why?” And they just fall apart. Whatever the reason is behind the valuation, have something that’s very clear, that builds it up to allow that to exist. And definitely, numbers are a good part of that. The “why” is a good part of that, because that will tell you where it’s going, but a lot of times people just say, “Because. Because this other company is worth this in this space.” And it’s like, that is not a reason to have a valuation for anyone. You are your own person.”

That’s great advice. Siminoff obviously doesn’t hold too much of a grudge against The Sharks. In 2019, he jumped back in the tank as a shark himself.

[Read More: Morgan Stanley Has This To Say About Remote Work]