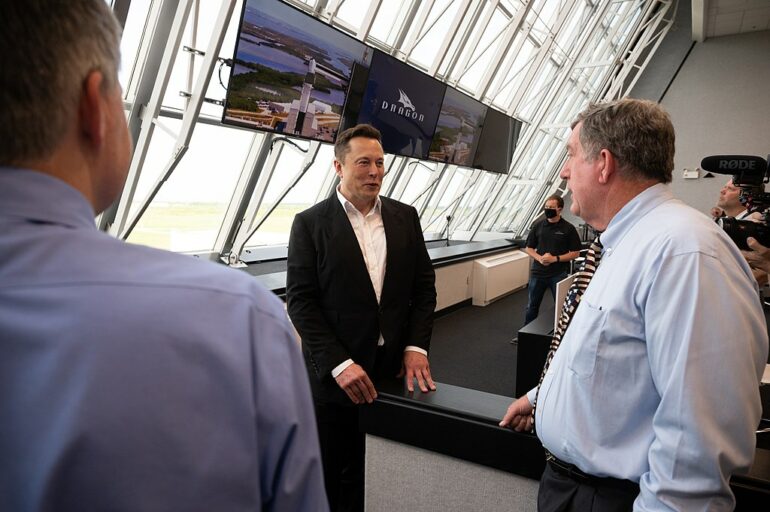 Elon Musk, SpaceX Chief Engineer, speaks with NASA International Space Station Program Manger Kirk Shireman, after the launch of a SpaceX Falcon 9 rocket carrying the company's Crew Dragon spacecraft on the Demo-2 mission with NASA astronauts Douglas Hurley and Robert Behnken onboard, Saturday, May 30, 2020, in firing room four of the Launch Control Center at NASA’s Kennedy Space Center in Florida. NASA’s SpaceX Demo-2 mission is the first launch with astronauts of the SpaceX Crew Dragon spacecraft and Falcon 9 rocket to the International Space Station as part of the agency’s Commercial Crew Program. The test flight serves as an end-to-end demonstration of SpaceX’s crew transportation system. Behnken and Hurley launched at 3:22 p.m. EDT on Saturday, May 30, from Launch Complex 39A at the Kennedy Space Center. A new era of human spaceflight is set to begin as American astronauts once again launch on an American rocket from American soil to low-Earth orbit for the first time since the conclusion of the Space Shuttle Program in 2011. Photo Credit: (NASA/Joel Kowsky)
BusinessOpinion

Article was originally published on FEE.org

Over the weekend, Twitter CEO Jack Dorsey made comments that would seem to confirm some suspicions I’ve had.

For some time now, I’ve wondered if Jack has been experiencing a quiet awakening. (Those tweets on bitcoin, inflation, and Murray Rothbard haven’t gone unnoticed—at least not by us.) And comments Dorsey made Saturday indicate he, like Dr. Frankenstein, is beginning to see the monster he created.

“the days of usenet, irc, the web…even email (w PGP)…were amazing. centralizing discovery and identity into corporations really damaged the internet,” Dorsey tweeted. “I realize I’m partially to blame, and regret it.”

This realization is important but also complex. Corporate censorship has been a thorny issue for libertarians, who on one hand support free expression but on the other recognize the right of private companies such as Twitter, Facebook, and YouTube to remove content and users for whatever reasons they wish, even if it creates a culture that stifles inquiry, debate, and expression.

Unfortunately, this is precisely the culture Big Tech has created—in no small part because of corporate America’s abandonment of the Friedman Doctrine, which argued social responsibility falls on the shoulders of company shareholders, not executives. Dorsey seems to have recognized this.

It’s no exaggeration to say I’ve felt a sense of despair over Big Tech’s censorship, especially during the pandemic. There’s something dark and dystopian about a handful of corporations —working directly with the government, mind you—censoring and banning people for sharing “misinformation” (a term that increasingly appears to mean Wrongthink).

Dorsey’s reflection seemed a step in the right direction to a thorny issue—admitting the problem is the first step in the road to recovery. Then something much bigger happened.

On Monday, news broke that Tesla founder Elon Musk had purchased a 9.2 percent stake in Twitter. News of the purchase sent Twitter’s stock price soaring in premarket trading. More importantly, the purchase makes Musk the largest shareholder in the company.

This is a big deal because prior to the news of the purchase, there had been rumblings that Musk might be eyeing up Twitter to help correct the direction of free speech.

“Free speech is essential to a functioning democracy,” Musk tweeted on March 25. “Do you believe Twitter rigorously adheres to this principle?”

The responses to Musk’s poll were one-sided—more than 70 percent of the 2 million voters responded “no”—and analysts say Musk’s purchase is evidence that he intends to take an active role in how Twitter is run.

“I think he intends to go active and force change at Twitter,” Dan Ives, tech analyst at Wedbush Securities, told CNN. “This is a shot across the bow at Twitter’s board and management team to start discussions.”

This is significant because, as Dorsey alluded to, the internet has been centralized under an umbrella of a handful of corporations, which makes it easy for the government to effectively outsource censorship of problematic speech, usually under the guise of protecting Americans from “misinformation” or “hate speech.”

Up to this point, Big Tech has mostly played along with Big Government. But Dorsey and Musk seem to recognize that something is rotten in Silicon Valley. And one of them, at least, appears to be taking steps to do something about it. This is vitally important, because free expression is integral to freedom and the human pursuit of truth.

“…if we truly wish to understand why freedom is necessary in a civilized society,” the great American reporter Walter Lippman once observed, “we must begin by realizing that, because freedom of discussion improves our own opinions, the liberties of other men are our own vital necessity.”

For years now, as Big Tech censorship grew more and more aggressive, champions of liberty have insisted that the market was the solution to the problem, not the government.

Musk’s large purchase of Twitter could be exactly what we’ve been waiting for.