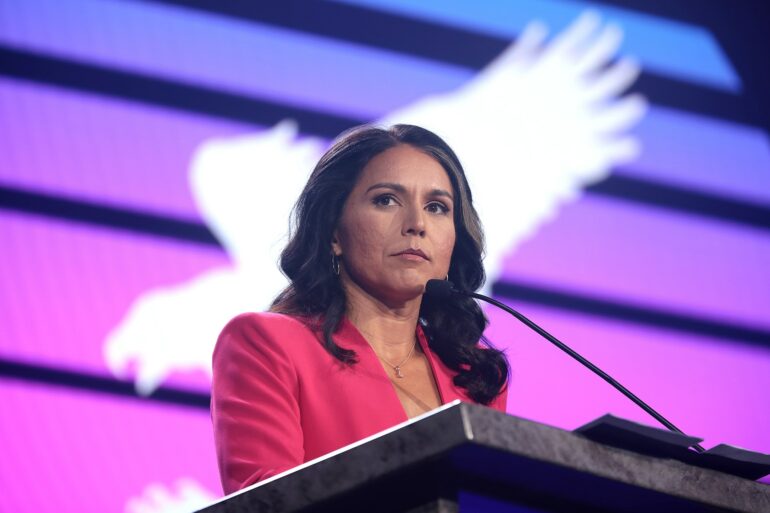 Former Democrat Rep. Tulsi Gabbard reportedly slammed George Santos during a recent interview while separately GOP congressman elect Nick LaLota called for an investigation over Santos’ lies about his past.

Santos, himself a GOP rep-elect from New York, has made headlines over the past week after it was revealed he fabricated a variety of biographical details which he then campaigned on.

“If I were one of those in New York’s 3rd District right now, now that the election is over, and I’m finding out all of these lies that you’ve told, not just one little lie or one little embellishment — these are blatant lies — my question is, do you have no shame? Do you have no shame? And the people who are now, you’re asking to trust you to go and be their voice for them, their families and their kids in Washington?” Gabbard said while interviewing Santos as she filled in for Tucker Carlson.

Santos has broken his silence after investigations this month from The New York Times and other sites showed he promoted misrepresentations, fabrications, and falsehoods about his personal life.

Santos has acknowledged “embellishing” his credentials in interviews with the New York Post and elsewhere this week, which included revelations that he did not graduate from college and that he did not work directly for banking behemoths Citigroup and Goldman Sachs.

“Over the last few weeks, I have heard from countless Long Islanders how deeply troubled they are by the headlines surrounding George Santos. As a Navy man who campaigned on restoring accountability and integrity to our government, I believe a full investigation by the House Ethics Committee and, if necessary, law enforcement, is required.” LaLota announced.