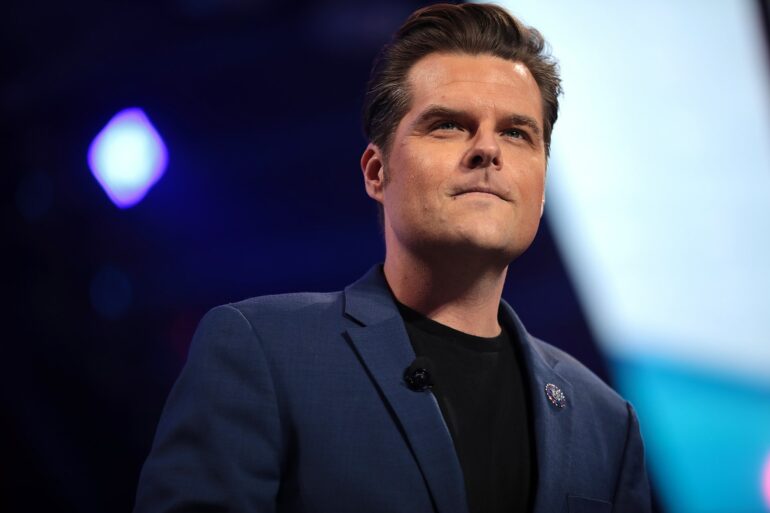 Prosecutors Recommend No Charges be Brought Against Rep. Matt Gaetz on Trafficking Charges

According to persons acquainted with the situation, career prosecutors now reportedly advised against prosecuting Rep. Matt Gaetz (R-FL) in connection to a long-running sex-trafficking probe, and have warned Justice Department bosses that a conviction is improbable due to credibility issues with the two key witnesses in the case.

Senior department officials have reportedly not made a final decision on whether or not to prosecute Gaetz, but such advice is not likely to be disregarded lightly, according to persons who spoke to The Washington Post on the condition of anonymity to discuss the internal debate. They also stated that it is always conceivable that new information could surface that will change prosecutors’ interpretation of the case.

Still it now appears extremely unlikely that Gaetz will be charged with a crime related to the allegations surrounding Gaetz’s alleged relationship with an underage girl.

According to persons familiar with the situation, investigators set out to determine if the congressman paid for sex in violation of federal sex-trafficking statutes and have gone on to study his interactions with the then-17-year-old.

An ex-girlfriend was among numerous women allegedly on a vacation with Gaetz that reportedly took place in the Bahamas in 2018 and has piqued investigators’ curiosity. According to persons familiar with the situation, the 17-year-old at the center of the inquiry was also on that trip, although at the time she was already over 18 at the time.

Joel Greenberg, a former acquaintance of Gaetz’s, is the other major witness in the case. Greenberg was accused with inventing false claims and evidence in order to try and discredit a political opponent in 2020, but prosecutors have now added further criminal counts to his case. He consented to enter a guilty plea to six felony offenses, including child sex trafficking, aggravated identity theft, and wire fraud. He additionally promised to fully cooperate with prosecutors in building a case against other individuals, likely including his former friend Gaetz.

Gaetz, a longtime defender of former President Trump, has continually denied the allegations against him and gone on to blast prosecutors and the media for allegedly purposefully leaking details of the investigation in order to smear him .