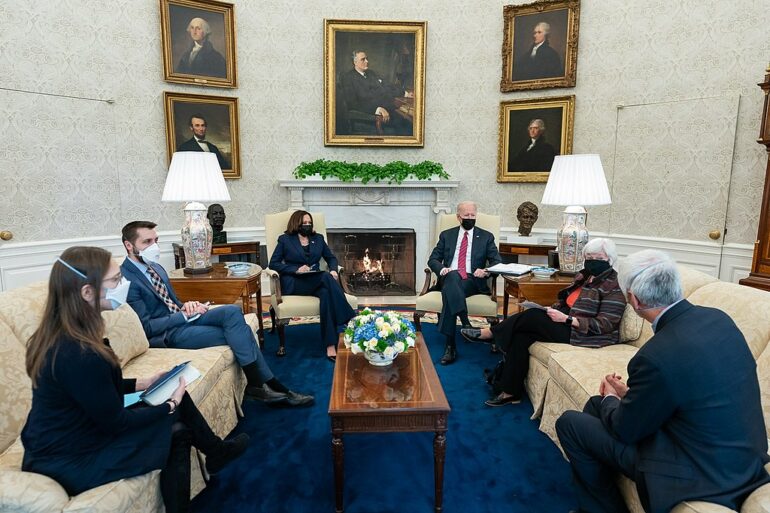 As Treasury Secretary Janet Yellen said during today’s meeting, the price of doing nothing when it comes to economic relief is too high. Congress must act quickly and pass the American Rescue Plan to deliver relief and help dig us out of this crisis. [Photo Credit: Adam Schultz, Public domain, via Wikimedia Commons]
NewsPolitics

Republicans Have Gained More Than 1 Million Voters in Past Year

The most concerning place for Democrats is among educated suburban voters who Trump lost.

That surge can be seen in areas like Atlanta, Denver, Pittsburgh, and Cleveland.

The Associated Press reports, “A political shift is beginning to take hold across the U.S. as tens of thousands of suburban swing voters who helped fuel the Democratic Party’s gains in recent years are becoming Republicans.”

Since Joe Biden took over for Donald Trump there has been an exodus from the Democrat party. Voters have made significant shifts in 43 states in big cities, medium cities, and small towns.

Senior CNN data reporter Harry Enten even predicted a landslide for Republicans in the midterms saying the GOP was in the best position they have been in 80 years.

The AP expanded on its report of where the shifts occurred, writing, “But nowhere is the shift more pronounced — and dangerous for Democrats — than in the suburbs, where well-educated swing voters who turned against Trump’s Republican Party in recent years appear to be swinging back. Over the last year, far more people are switching to the GOP across suburban counties from Denver to Atlanta and Pittsburgh and Cleveland… Republicans also gained ground in counties around medium-size cities such as Harrisburg, Pennsylvania; Raleigh, North Carolina; Augusta, Georgia; and Des Moines, Iowa.”

Enten estimated that Republicans would hold 236 to 241 seats compared to the Democrat with 194-199 of the election happened soon.