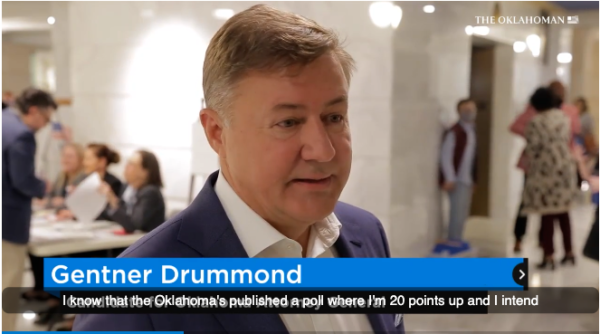 Screenshot via The Oklahoman
NewsPolitics

Gentner Drummond,, who donated to a Democrat in 2014 to unseat Republican Senator Jim Inhofe, refunded a contribution to Joe Biden’s 2020 Presidential campaign.

Federal records indicate that Drummond donated to 11 Democrat candidates since 2004.

Drummond, who also ran in 2018 for attorney general, refunded his $1,000 contribution to Biden’s presidential campaign in 2020 nine days after it was issued, according to FEC records. FEC records also show Drummond contributed $1,000 to candidate Matt Silverstein in his 2014 campaign to unseat Republican Oklahoma Sen. Jim Inhofe, and $1,450 to candidate John Olson in his 2012 race for Oklahoma’s 1st Congressional District.

Drummond does donate to both Democrats and Republicans, but his opponent John O’Connor, the AG since 2021 is using it as powerful ammo.

In 2020, three of Drummond’s businesses — a cattle ranch, a chain of cellphone retailers and a law firm —  received a combined $1.9 million in Paycheck Protection Program loans that were later forgiven by the federal government, according to data from the Small Business Administration and ProPublica.

[READ NEXT: Biden Caved to This Foreign President]