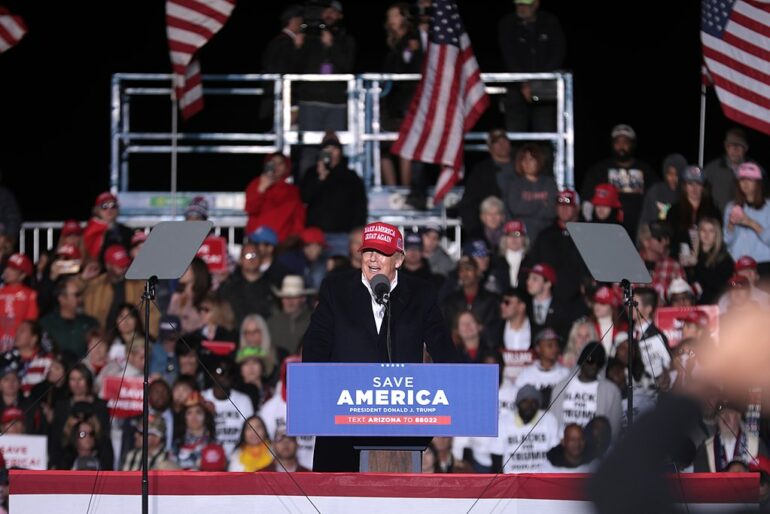 Former President of the United States Donald Trump speaking with supporters at a "Save America" rally at Country Thunder Arizona in Florence, Arizona. via Gage Skidmore
News

The January 6th Committee has filed documents in court accusing former PresidentTrump and his associates of crimes.

The committee specifically mentions a conspiracy to overturn the 2020 presidential election.

Evidence suggests that then-President Trump obstructed an official proceeding, according to the committee.

The case revolves around lawyer and law professor John Eastman’s theory that former Vice President Mike Pence could stop the certification of the election.

The Committee claims that, “to defraud the United States by interfering with the election certification process, disseminating false information about election fraud, and pressuring state officials to alter state election results and federal officials to assist in that effort.’’

Pence ultimately made the decision that he did not have the power that Eastman said he did.

Biden Looks to Block Offshore Drilling in the Atlantic and Pacific

[READ NEXT: Trump Considers These Pardons if He is Re-Elected]

A battle between Eastman and Pence’s legal team was evidenced from documents with Pence lawyer Gregory Jacob writing on January 6th , ‘‘I have run down every legal trail placed before me to its conclusion and I respectfully concluded that as a legal framework, it is a results oriented position that you would never support if attempted by the opposition, and essentially entirely made up… And thanks to your bulls—, we are now under siege.”