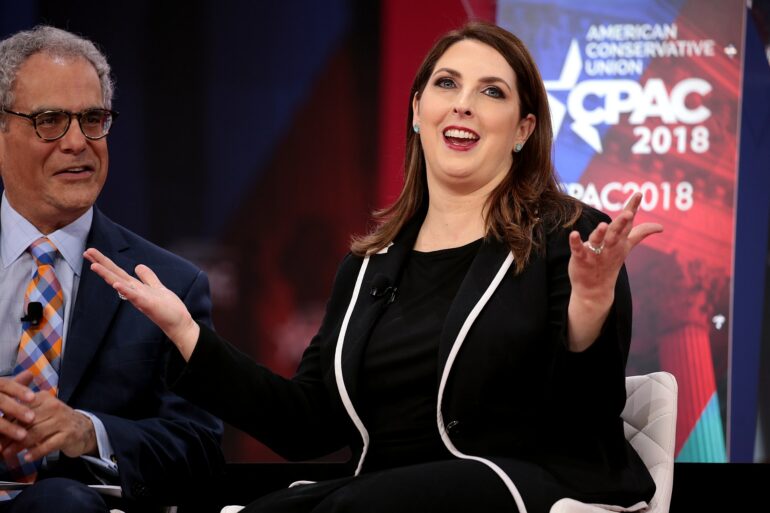 According to a recent survey conducted by a conservative grassroots group, a majority of Republican voters feel the party should move on from Ronna McDaniel and pick a new chairman for the Republican National Committee (RNC).

According to a late-December Trafalgar Group poll, around 73 percent of Republican voters believe the party should nominate someone new to lead the RNC during the party’s gatherings later this month.

Six percent of respondents polled believe McDaniel should be re-elected for a fourth term, while 21% are unsure.

The results reflect some of the growing unrest with McDaniel’s leadership of the RNC as she faces her first real challenge since taking over the national party apparatus in 2017.

While a growing number of conservatives are calling for her to step down, McDaniel has the support of a majority of RNC members, which is all she needs to win reelection.

McDaniel’s critics have pointed to the party’s underwhelming 2022 midterm performance.

Since McDaniel took over the RNC, Republicans lost the House in 2018 and lost the White House and Senate in 2020.

The Convention of States Action poll found 63 percent of voters viewed the Republican Party and its congressional leadership as ineffective at getting Republicans elected in 2022, compared to 36 percent that viewed it as effective.

According to the study, 44 percent of respondents are less inclined to contribute money to the GOP or Republican candidates after the 2022 midterm elections, while 43 percent are unsure whether they would be more or less likely to donate.

McDaniel’s supporters believe that poor candidate quality is to blame for the GOP’s recent failures, and that the RNC does not choose candidates.

The party is primarily in charge of generating and distributing funds, as well as advocating for larger reforms in debates and election integrity, areas in which McDaniel’s supporters say she has excelled.