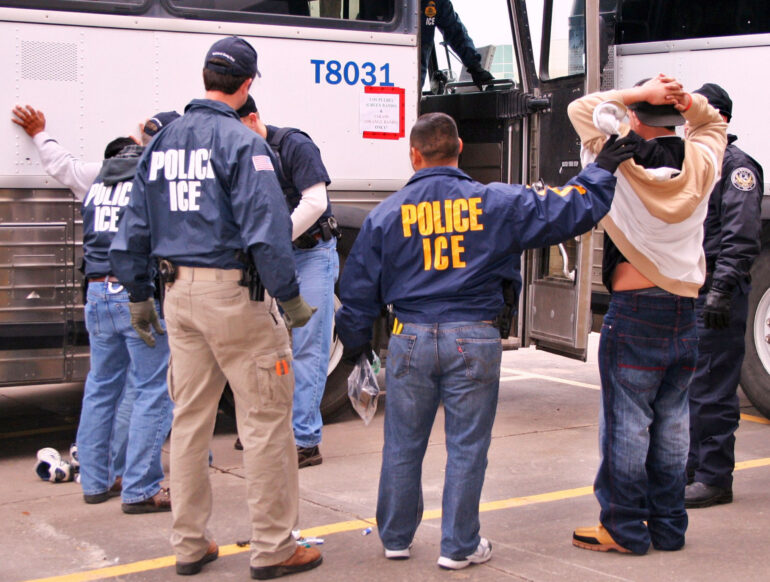 [Photo Credit: By U.S. Immigration and Customs Enforcement (ICE), www.ice.gov. Please credit by saying "Photo Courtesy of ICE". - Image. Raid described in this press release, which is listed here together with the photo. This photo is captioned 'ICE agents with some of the suspects arrested in operation "Night Moves."'.Transferred from en.wikipedia to Commons by User:Logan using CommonsHelper., Public Domain, https://commons.wikimedia.org/w/index.php?curid=16133898]
NewsPolitics

U.S. Immigration and Customs Enforcement (ICE) confirmed in a letter to Syracuse University’s Transactional Records Access Clearinghouse on December 22 that it reportedly had no records of hundreds of thousands of illegal immigrants let into the nation with electronic monitoring devices (TRAC).

TRAC was notified by ICE that it had no records of the 377,980 people tracked by the agency’s “Alternatives to Detention” (ATD) program, which was used to electronically track illegal immigrants released into the US. TRAC has requested data on persons in ATD custody from the start of fiscal year 2019 through August 2022 via a Freedom of Information Act (FOIA) request.

With limited jail capacity, ICE depends on the program to keep inmates who have been held in immigration courts for years. But without reliable records for tracking there is no way for the agency to actually control the flow of illegal migrants into America.

The government has previously provided TRAC with information on persons enrolled in ATD, including which technology was utilized and when they entered the program, among other important details.

The DCNF recently reported on ATD data inaccuracies and miscalculations including illegal immigrants who were not tracked using any technology and others who were tracked using GPS tracking.

Later, ICE apologized for the error and corrected the data.