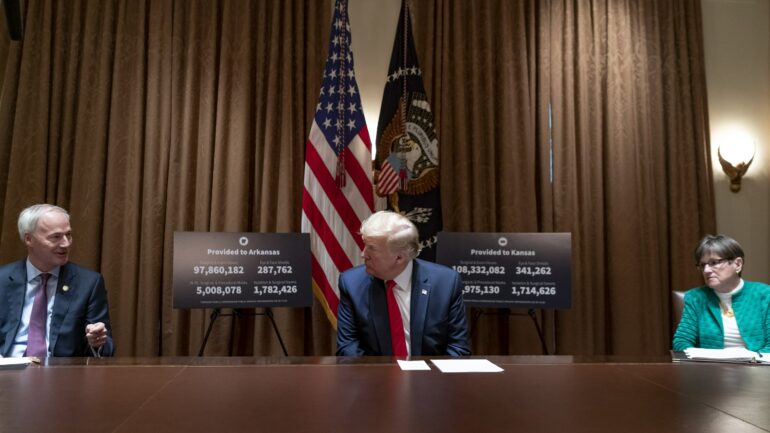 [Photo Credit: By The White House from Washington, DC - President Trump Meets with the Governor of Arkansas and the Governor of Kansas, Public Domain, https://commons.wikimedia.org/w/index.php?curid=90519462]
Politics

Trump shocked observers on Tuesday evening when he hosted the two for dinner at his Mar-a-Lago estate.

West has been in the news recently for a string of increasingly anti-Semitic statements, which resulted in big name sponsorships leaving him, amounting to a significant impact to his own personal fortune.

Fuentes is a divisive far-right podcaster and pundit who has been barred from key social media sites due to his white supremacist and anti-semitic ideas.

Hutchinson opened up the conversation by attempting to draw major distinctions between Trump’s behavior with white supremacists and his own:

“In this instance, it’s important to respond, and as you mentioned, the last time I met with the a white supremacist, it was in an armed standoff. I had a bulletproof vest on. We arrested them, prosecuted them, sent them to prison,” Hutchinson said.

According to Hutchinson, the meeting was not the ideal example to set as a leader.

“And so, no, I don’t think it’s a good idea for a leader that’s setting an example for the country or the party to meet with an avowed racist or anti-Semite. And so it’s very troubling and it shouldn’t happen. And we need to avoid those kinds of empowering the extremes. And when you meet with people, you empower and that’s what you have to avoid. You want to diminish their strength, not empower them, stay away from it.” Hutchinson continued.

After the meal made headlines, Bash shifted the subject to Trump’s distance from Fuentes. According to Politico, Trump stated in a statement posted on Truth Social on Friday that he was unaware of Fuentes and that West had suddenly brought the pundit with him.

As the interview progressed, Hutchinson went on to criticize Trump for failing to directly condemn Fuentes and his philosophy.

“What Donald Trump did, and his failure to condemn it, is really the minority of the party. It’s an extreme side of it, and that’s what you’ve got to distance yourself from. And he failed to do that,” he added.