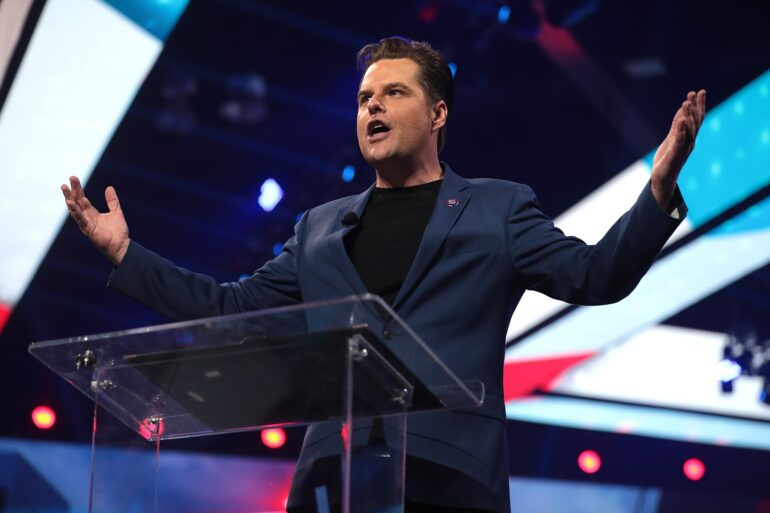 Rep. Matt Gaetz (R-FL) reiterated Tuesday his pledge to prevent Rep. Kevin McCarthy (R-CA) from becoming House Speaker if the GOP retakes the majority in the next Congress.

Gaetz spoke on Steve Bannon’s War Room podcast on Tuesday, telling Bannon that despite the GOP’s narrow majority, he had the “critical mass” to deny McCarthy the speakership.

Gaetz claimed that five key republican votes (including his own ) that would prevent McCarthy from becoming House Speaker, which included the following:

“To catch everyone up, last week there were 36 votes against Kevin McCarthy in the Republican conference, and again, Kevin has had years to try to convince people of the worth of his candidacy. Since that time, zero of those 36 have come out to say, ‘You know what, I voted against McCarthy previously, but I’m now prepared to vote for him on the floor. Zero,’” Gaetz said during his appearance.

“It’s interesting to see McCarthy going around talking about all the subpoenas he wants to issue, because when he was in the majority last, when he was the majority leader last, he did not utter one word in support of subpoenas that Jim Jordan and, at the time, Ron DeSantis and Mark Meadows and I were calling for on the House Judiciary Committee. So Kevin McCarthy will revert to his establishment mean the moment he gets power, and that’s why there are enough of us now, a critical mass, standing as a bulwark against his ascension to the speakership,” Gaetz added later in the discussion.