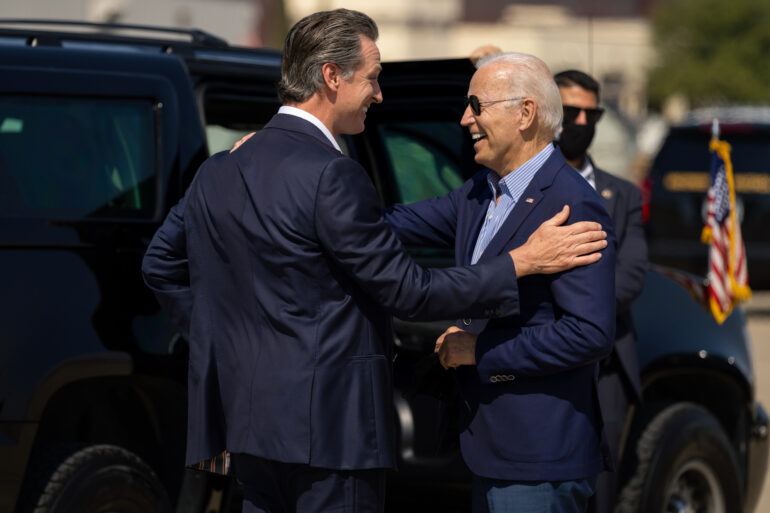 REPORT: Newsom For Sure Running in 2024 if Biden Backs Out

After months of fretting, it appears as if the Democrats may finally have a real successor to the flailing and increasingly ailing Joe Biden in 2024.

According to a stunning report from The Wrap, controversial California Governor Gavin Newsom is ‘undeniably’ and ‘unequivocally’ going to be running for the Democratic Presidential nomination in 2024 if President Biden backs out of the race due to his advanced age or his, increasingly obvious, mental feebleness.

The report was based on exclusive information from two separate sources who both had intimate knowledge of Newsom’s plans.

Although officially Newsom has repeatedly stated that he has no intention of running for President, according to both of the highly placed sources this claim is merely a smokescreen for the Governor’s overweening political ambition. ‘After this midterm election is over, he absolutely is going to announce that he is running for the presidency once Biden announces that he is not running,’ one of the sources said ‘No ifs, ands or buts. He will run if Biden does not.’

Of course, if Biden decides not to run for a second term, Vice President Kamala Harris, who won statewide elections in California as both attorney general and U.S. Senator, is expected to run. Despite the fact that Newsom and Harris both have deep California ties, insiders told TheWrap that they expect the Newsom will nonetheless challenge her.

Democratic party insiders don’t expect Newsom to announce his budding Presidential ambitions till well after the Mid-term elections however.

Newsom will face the vastly overmatched Republican State Senator Brian Dahle this fall in the contest for theCalifornia Governorship, a race Newsom is expected to easily win.

However, even before The Wrap’s reporting, it was becoming increasingly obvious that Newsom had his eyes set well beyond California. On Friday, the governor made headlines when he launched a series of billboard campaigns criticizing abortion restrictions in Texas, Indiana, Mississippi, Ohio, South Carolina, South Dakota, and Oklahoma. The decision of the United States Supreme Court to overturn Roe v. Wade has become a contentious issue in elections across the country. Newsom’s billboards direct people to abortion.ca.gov, a website that provides information on how to obtain an abortion in California.

Newsom has also attempted to cultivate a rivalry with Florida Governor Ron DeSantis, who many believe may end up being the GOP nominee in 2024 if former President Trump chooses not to run or is otherwise disqualified.

A recent poll conducted by Probolsky Research has shown that DeSantis doing remarkably well against Newsom in a head-to-head matchup, even in California, were he easily bests for Democrat Governor among independent voters and Latinos.