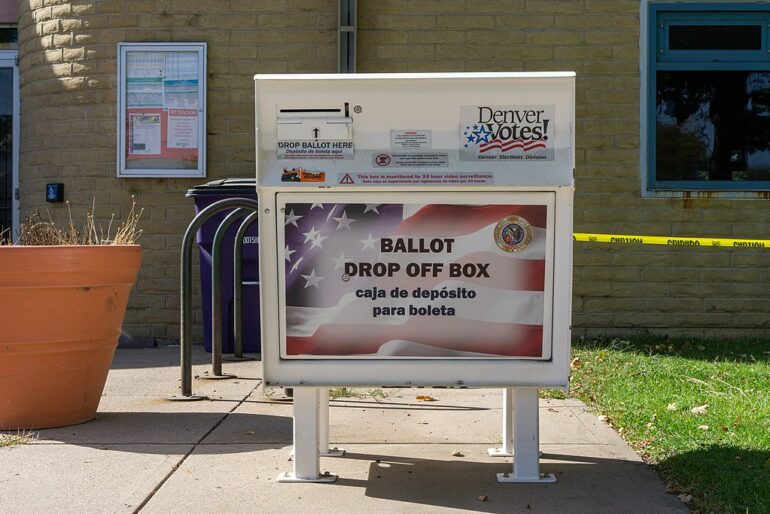 Originally appeared on The Daily Signal.

Democrats haven’t stopped trying to take over elections, they just have new tactics to do so under voters’ noses.

Employees throughout the federal government who are carrying out President Joe Biden’s executive order directing them to get involved in state elections are likely all violating the Anti-Deficiency Act, besides interfering in the election process and using federal resources in what seems to be a get-out-the-vote operation for the party in power in the White House.

And the administration is doing everything it can to hide its activities in violation of the federal open records law.

On March 7 last year Biden issued an executive order that he claimed was intended to promote “access” to voting. He has no constitutional or statutory authority for this order.

Biden justified it by making a series of false allegations in the order. He claimed, for example, that “many Americans, especially people of color, confront significant obstacles to exercising their fundamental right,” including “difficulties with voter registration, lack of election information, and barriers to access at polling places.”

These claims are absurd.

It is easier to register today than ever before through numerous state and local agencies and offices, as well as universal registration by mail and even online registration in most states.

According to the U.S. Census Bureau, registration in the last federal election in 2020 was higher than in the 2000, 2004, 2008, 2012, and 2016 presidential elections. And barriers to polling places? What barriers? Turnout in the 2020 election according to the Census Bureau was 66.8%, just short of the record turnout of 67.7% of voting-age citizens in the 1992 election. Biden’s entire executive order is based on a lie.

The order directed every federal agency to come up with a “strategic” plan to use agency personnel and resources to persuade and “assist” members of the public who interact with that agency to register to vote and cast ballots in the upcoming election, including providing access to “vote-by-mail ballot applications,” identification documents, and multilingual voting materials.

It even told the agencies to solicit third-party organizations to “provide voter registration services on agency premises,” virtually guaranteeing that liberal, left-wing organizations who want to keep Biden and his party in office will have access to every member of the public interacting with the federal government in official settings.

This executive order risks sowing confusion and chaos as federal agencies interfere in the voter registration and election process administered by the states. It also risks confusing (and intimidating) vulnerable members of the public who are applying for federal benefits into thinking they must register and vote for the political party in control of the White House and Congress to ensure their applications for benefits are not declined.

Another way of looking at this is as Zuckbucks 2.0. In the 2020 election, Mark Zuckerberg gave several hundred million dollars to a left-wing nonprofit that then distributed the money in “grants” to local election offices.

Almost all of the money went to dense, urban areas like Philadelphia controlled by Democrats. The point of this private funding was to use local government resources for the Democratic Party’s get-out-the-vote campaign. Now that Democrats have control of the executive branch, they want to use taxpayer money to do the same thing.

And the Biden administration doesn’t want to reveal the details of the strategic plans formulated by these federal agencies.

Not only have state election officials not been given information about this, but several organizations, including the Foundation for Government Accountability, that filed requests under the federal Freedom of Information Act trying to get copies of these plans, have been met with outright defiance from the Biden administration. It has refused to comply with the law, forcing the FGA to file a lawsuit to compel compliance with the Freedom of Information Act. The FGA just obtained a court order telling the Justice Department that these documents have to be turned over prior to the midterm elections, and not in 2023 – after the midterm elections – as the Justice Department was requesting.

In addition to Biden engaging in unilateral action for which he has no legal authority in order to interfere with a state function and potentially intimidate the public, all of the federal personnel who are participating in this Democratic get-out-the-vote operation using government resources and taxpayer funding are violating the Anti-Deficiency Act, which prohibits federal agencies and employees from spending funds on activities that Congress has not authorized and for which Congress has not appropriated funding.

Congress has not appropriated funding for any federal agency in the executive branch to engage in voter registration and ballot activities.

The only exception is the Department of Defense, which administers the Federal Voting Assistance Program for overseas military and civilian personnel and their families. Violations of the Anti-Deficiency Act can subject the federal employee to suspension and termination, as well as fines and imprisonment for up to two years.

Not only should Congress investigate this unlawful action by Biden, but the inspectors general of every federal agency and department should investigate the potential violation of the Anti-Deficiency Act by their employees.

Moreover, secretaries of state across the nation, as the chief election officials of their states, should be objecting vociferously – and potentially through court action – against Biden’s attempt to interfere in, and manipulate the outcome of, the upcoming midterm congressional elections in November.

It has been reported that the Justice Department is investigating former President Donald Trump’s supposed “interference” in the 2020 election while totally ignoring the ongoing interference in the 2022 election.

Hans von Spakovsky is a senior legal fellow at The Heritage Foundation, a former commissioner on the Federal Election Commission, and former counsel to the assistant attorney general for civil rights at the U.S. Department of Justice. He is a member of the board of the Public Interest Legal Foundation.