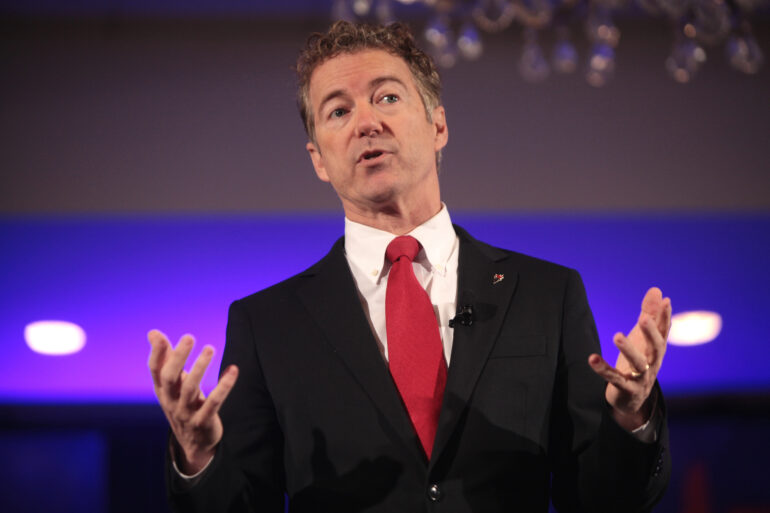 This article originally appeared on the Daily Signal.

The economic crisis facing the nation is disproportionately hurting small businesses. Mom and pop shops are struggling to stay afloat in the face of historic levels of inflation. Against this backdrop, Democrats have proposed raising taxes on pass-through entities—small businesses, including sole proprietorships, partnerships, limited liability companies, and S corporations.

“It’s a terrible time to also talk about raising taxes,” says Paul. “Businesses are reeling from the inflationary rising costs; now, they would have an additional tax.”

Paul has been going around the country talking with small-business owners who want relief from inflation and high taxes.

“They’re very concerned, not only with the inflationary input, but adding a tax to this when small business is tenuous, and they’re still coming out of the lockdowns,” he says.

The Kentucky lawmaker adds that this tax hike would have unintended consequences that Democrats aren’t thinking of.

“One of the unintended consequences will be closure of businesses and increased unemployment and exacerbation of the recession,” he says. “This is something that we will fight steadfastly against and do everything possible not to let this happen to the American people.”

Paul warned that “if we do nothing, there’s a possibility inflation gets worse. I think that’s the most likely scenario. I think between now and the election, we’re going to see a worsening of inflation.”

Also on today’s show, Heritage Foundation economics expert E.J. Antoni discusses the possible consequences of inflation on the American people and how long we might be dealing with the issue.

We also cover these stories:

Listen to the podcast below or read the lightly edited transcript:

Doug Blair: My guest today is Sen. Rand Paul from the great state of Kentucky. Senator, welcome to the show.

Sen. Rand Paul: Thanks for having me.

Blair: Of course. We spoke briefly the other day about how inflation is killing small businesses, and now we’re hearing that Senate Democrats are proposing a tax hike on pass-through entities. How will that tax hike impact small businesses?

Paul: I think right now in the midst of an inflationary cycle where small business is grappling with rising prices through inflation and the unpredictability of some prices rising faster than others, it’s a terrible time to also talk about raising taxes. It’s probably never a good time to be raising taxes on small business, but particularly when the economy is tenuous.

We’ve had at least one quarter of negative [gross domestic product] growth, there are strong suggestions that second quarter’s going to be negative as well. Many economists define a recession as two quarters in a row of negative growth. That’s a really terrible time to add in new costs. Businesses are reeling from the inflationary rising costs, now they would have an additional tax.

The mass majority of Democrats want to pass this. I think Sen. [Joe] Manchin is still not committed to this tax increase. Let’s hope that it will fail, but this is still something they’re bandying about. If we pass a tax increase, going into a recession, it’s a surefire way to make the recession quicker, sooner, and worse.

Paul: Yeah. Our economists predict that it’d be two-thirds of small businesses in Kentucky, we’re talking about over 8 million businesses nationwide. But as I’ve traveled around Kentucky and around the United States, when I talk to small business owners, they’re very concerned, not only with the inflationary input, but adding a tax to this when small business is tenuous, they’re still coming out of the lockdowns. This would be a terrible time to do this.

It’s like so many other things that the Democrats want to do, there are a great deal of unintended consequences. One of the unintended consequences will be closure of businesses and increased unemployment and exacerbation of the recession. This is something that we will fight steadfastly against and do everything possible not to let this happen to the American people.

If we can get through November, basically, we’ll be somewhat protected from this nonsense because our hope is that come November, Republicans will take at least one house of Congress and that way putting us at ease somewhat from all of these terrible ideas coming from Democrats.

Blair: What are some plans if the GOP is able to reclaim either one or both houses of Congress come November?

Paul: I think the main thing is, you’re protected from huge spending bills, huge deficits, and huge increases in taxes. Worst case scenario, you’re also protected from things like packing the Supreme Court, D.C. becoming a state, the socialization of America that many of the new Democrat socialists would actually try to get passed.

I think what’s alarming to a lot of us is that the Democrat Party no longer has much of a middle, no longer has much of a center left. It’s got the extreme left tugging, pulling, and kicking them. This is not just liberal, these are people now who actually self-identify as socialists. This is a real danger to the country. November can’t come soon enough for most of us.

Blair: Fair point. November is quite a bit further away than we would hope, but what can the GOP do now, while waiting for November to come, that could positively impact small businesses?

Paul: I think pointing out what causes inflation. I think there’s so much misinformation on television that people are like, “Well, we just need to give people thousand-dollar checks.” In California, they’re giving people checks to compensate for inflation, not understanding that it was the free money and the checks that caused the inflation. Free money causing inflation is not cured by giving people more free money.

The M2 is a measure of the money supply. It’s been going up at about 15% a year for the last three years. If you look at last January as a snapshot, the M2 is increasing in an annualized rate of 27%.

Inflation should not be a surprise to people, it’s an increase in the money supply that increases the demand for all goods, and that causes generalized inflation. That’s what we’ve got. If you want to get rid of inflation, quit digging the hole, quit adding debt to it.

But there are many people that would say it’s even worse than that, that the only way, ultimately, an inflationary cycle ends is either through recession or through a rise in interest rates until you actually have a slowing of the economy.

If we do nothing, there’s a possibility inflation gets worse. I think that’s the most likely scenario. I think between now and the election, we’re going to see a worsening of inflation.

The record in our country was in 1980, 14.7%. Right now, the producer inflation, we’re seeing double-digit inflation. I think we could conceive of consumer price inflation at that level. In fact, some people who measure inflation say that the definition has changed over the year to lessen the measure of it, that if you took the original measure of inflation that we used in 1980, that we may already be exceeding the inflation of the 1980s.

Blair: A very grim prognosis. Well, that was Sen. Rand Paul from the great state of Kentucky. Senator, I really do appreciate your time.

Paul: Thanks for having me.