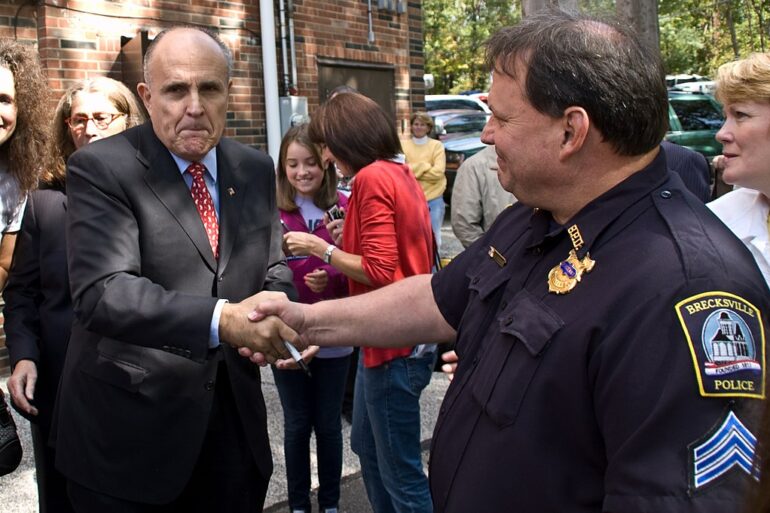 Update: The suspect’s charges have been lessened after video emerged of the incident. ShopRite employee Daniel Gill has now been charged with two misdemeanors third-degree assault and menacing. He has also been charged with second-degree harassment. He is due back in court in August.

Former New York Mayor –and a top lawyer and advisor to former President– Rudy Giuliani was assaulted on Sunday.

Giuliani was just leaving the men’s restroom at a ShopRite store in New York after he got done campaigning for his son, Andrew, who’s running for New York Governor when a worker at the store slapped him.

Giuliani, who was coined “America’s Mayor” for his work surrounding 9/11, described the attack to the New York Post:

“All of a sudden, I feel this ‘Bam!’ on my back,” Giuliani said. “I don’t know if they helped me not fall down, but I just about fell down, but I didn’t.

“I feel this tremendous pain in my back, and I’m thinking, what the — I didn’t even know what it was,” he said. “All of a sudden, I hear this guy say, ‘You’re a f–king scumbag,’ then he moves away so nobody can grab him.

“And he says, ‘You, you’re one of the people that’s gonna kill women. You’re gonna kill women,’ ” Giuliani said, quoting the suspect, who now faces assault charges. “‘You and your f–king friend are gonna kill women.’ Then he starts yelling out all kinds of, just curses, and every once in a while, he puts in that woman thing.

Giuliani told a New York radio host that the slap felt like someone shot him and that luckily he’s in pretty good shape for a 78-year old.

He also called the police on the assailant because he explained that you need to show people that you can’t do things like this.

Gill, 39, has been charged with second-degree assault involving a person over age 65.