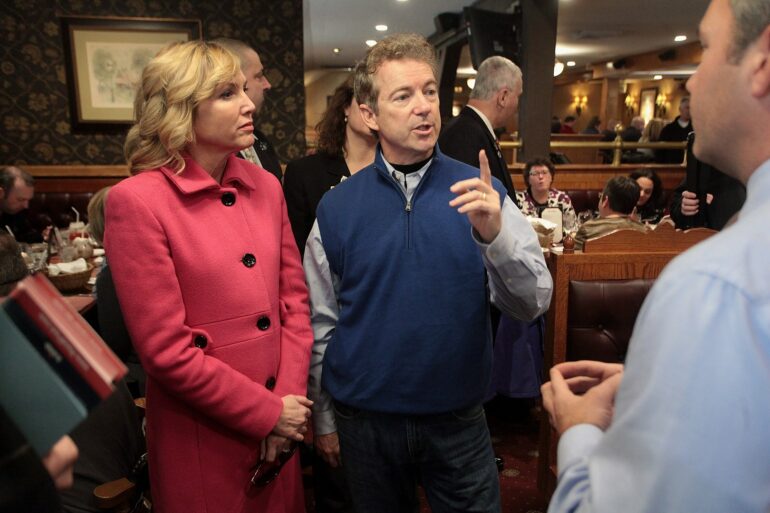 “Five years ago, we could balance our budget with a freeze in spending without cutting anything. Since then, our debt has skyrocketed to $30 trillion with $2 trillion just from this past year,” said Dr. Paul. “We are now in a situation that a simple penny, two, three, or even a five pennies per-dollar reduction is insufficient to balance our budget. It requires six. We cannot keep ignoring this problem at the expense of taxpayers, and my budget will put our nation on track to solve this crisis that Congress created.”

“CBO’s newest budget projection illustrates the government’s fiscally perilous path. Without a change of course, trillions will be added to the debt, a burden being unfairly dumped onto future generations of taxpayers. Senator Paul’s Six Penny Plan approach would take smart, incremental steps towards fiscal responsibility by cutting 6 cents for every dollar of spending, while also preventing tax hikes, and making much-needed reforms to the budget and scorekeeping process,” said Demian Brady, Vice President of Research at the National Taxpayers Union Foundation.

“The biggest threats to national security are the national debt and out-of-control spending. There is bipartisan support in Congress to continue spending taxpayer dollars in an irresponsible fashion; however, there is no consensus on how to get our federal budget under control and address the future of entitlement programs, like Social Security. Thankfully, Senator Rand Paul is once again leading the charge with his “Six Penny Plan,” which will help the federal government get its finances back on track. With inflation at an all-time high, now is the time for members of Congress to reassess their spending habits and take on the national debt crisis in a serious manner,” said Adam Brandon, President of FreedomWorks.

“Unfortunately, the Biden Administration continues to engage in economic malpractice by restricting the development of reliable and affordable American energy and by advocating for even additional inflationary spending plans. As we face the real threat of stagflation for the first time since the Jimmy Carter era, we need a major course correction from policymakers in Washington. Senator Rand Paul should be commended for his bold approach to address our $30 trillion national debt. Sen. Paul’s common sense spending reforms put taxpayers first by addressing the root cause of our national debt: overspending,” said Jonathan Williams, ALEC Chief Economist and Vice President of Policy.

“America is sitting on a national debt time bomb, yet most of our politicians in Washington are simply squabbling over how best to waste more of our money. But Senator Paul is one of the rare few actually working to protect Americans’ wallets. Senator Paul’s penny plan is a long overdue, common-sense plan that would incrementally restore fiscal responsibility to our out-of-control federal budget. Anyone who cares about the next generation’s financial future ought to support this sensible, responsible plan,” said Brad Polumbo, economics journalist and policy analyst.

“Senator Rand Paul has been fighting for fiscal responsibility and raising the alarm on federal spending with his Penny Plan since 2017. Had Congress listened, then we could have a balanced budget today. Instead, we’ve seen Congress exacerbate inflationary pressures with unprecedented spending levels. As President of the Taxpayers Protection Alliance, I thank Senator Rand Paul for this commonsense solution to the balanced budget and protect taxpayers,” said David Williams, President of The Taxpayers Protection Alliance.

“America is facing both an inflation crisis and a debt crisis, and they’re both being caused by Washington’s addiction to spending. Yet even with inflation over 8% and a national debt that has surpassed $30 trillion, Democrats in Congress continue to advocate for more spending, which will only make both crises worse.  Fortunately, Senator Paul has introduced the “Six Penny Plan,” which would cut wasteful spending and put the United States on a path to a balanced budget within five years.  Americans deserve a serious plan to get our fiscal house in order, and Senator Paul has delivered,” said Garrett Bess, Vice President of Heritage Action.

“Senator Rand Paul has long been a champion of balancing the federal budget and protecting the American taxpayer.  Senator Paul has a plan that will balance the budget in five years. Interestingly, if Congress had voted for Senator Paul’s plan five years ago, we would not be suffering runaway inflation, economic downturns, slowdowns, severe shortages, and empty shelves at the store. And we’d be celebrating a balanced budget too! If we wait even longer to take action, we will suffer more inflation, larger and larger deficits, and more economic instability. And then it will take much larger cuts to get things back on track. So now is the time to act before the problem becomes so large that it cannot practically be fixed,” said George Landrith, President of Frontiers for Freedom.

Dr. Paul offered his first balanced budget in 2011. In 2017, Dr. Paul introduced his first budget that balanced using a flexible, top-line, on-budget spending limitation. That budget was not a reduction in spending, but a simple five-year freeze. Had that budget been adopted then, the budget would have balanced this year.

By 2018, the nation’s fiscal imbalance had worsened. Dr. Paul again offered a budget that balanced, but now required a one penny per-dollar reduction in spending off the top-line. In his accompanying report, Dr. Paul warned of the risk that continued deficit spend would make the U.S. more vulnerable to foreign advisories and hinder our capacity to respond to emergencies. In particular, he noted inflation was how such risks would manifest. Congress ignored his warning then, and now we see an inflation rate of 8.3 percent.

In 2019, the situation was still worse. Whereas in the previous year a single penny on the dollar was required to balance, now it required two cents. Dr. Paul again offered a now “Pennies Plan,” which again would have balanced in just 5 years.

Since Dr. Paul’s first spending freeze budget, Congress has added nearly $11 trillion to the federal debt. The annual structural deficit has more than doubled, and interest payments on the debt have grown by 32 percent. Inflation has reached a 40-year high. And now, a simple penny or two is insufficient to balance.

Now, it requires SIX pennies to balance the budget in five years.

Instead of celebrating a balanced budget this year, and again allowing spending to grow at historic norms, we are faced with a weakened and teetering economy, a prescription for our ills that is six times more dramatic than it ever had to be.

Congress’s refusal to accept the responsibility to act as good stewards of American taxpayer dollars has caused our bleak financial position. Americans everywhere are feeling the effects of historical high inflation and sustaining labor and supply chain issues. Short-term political gains of the past, are in fact causing us harm now. Not to our children and grandchildren off in the future, but to us here today.

You can read the Six Penny Plan in its entirety HERE.