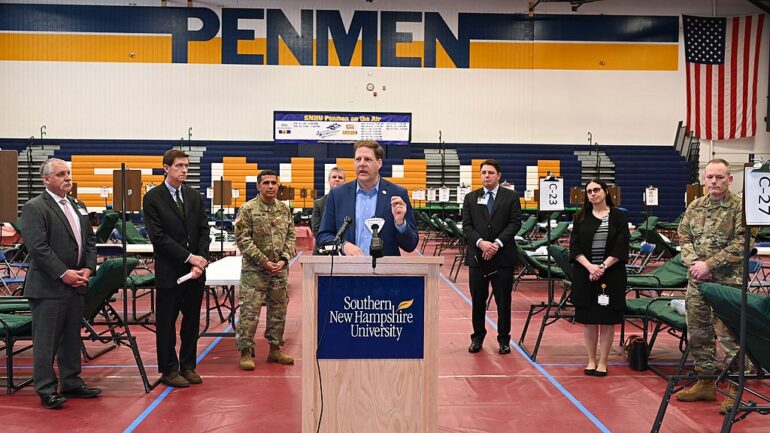 Gov. Chris Sununu and state agency representatives address the media following a tour of Southern New Hampshire University's COVID-19 alternate care site in Hooksett, Mar. 24. The facility will augment area hospitals, if necessary, to assist if an overflow of patients is caused by the pandemic. Sununu thanked everyone involved in making the "surge" care site a reality. "You need this partnership to work exactly as it happened here," Sununu said. [Photo Credit: Staff Sgt. Charles Johnston, Public domain, via Wikimedia Commons]
NewsPolitics

Then he pulled out his hammer, calling Trump “fu-king crazy.”

“He’s f–king crazy!” Sununu told the political and media elites gathered for Saturday’s annual event, which traditionally skewers politicians from both sides, as well as journalists.

Sununu said Trump “stresses me out so much” — while joking about how he planned to deny his comments later.

“The press often will ask me if I think Donald Trump is crazy,” said Sununu, New Hampshire’s governor since 2017, according to Politico.

“I’ll say it this way: I don’t think he’s so crazy that you could put him in a mental institution. But I think if he were in one, he ain’t getting out.”

Trump has drawn more and more open criticism from Republicans, especially moderates, in recent month, drawing into question whether he will be the 2024 nominee for presidents.

Some commenters claim that Trump is only supported by a small group of supporters, who are loud.

However, it is hard to truly tell, the primaries leading up to 2024 will tell the true tale should Trump decide to run.