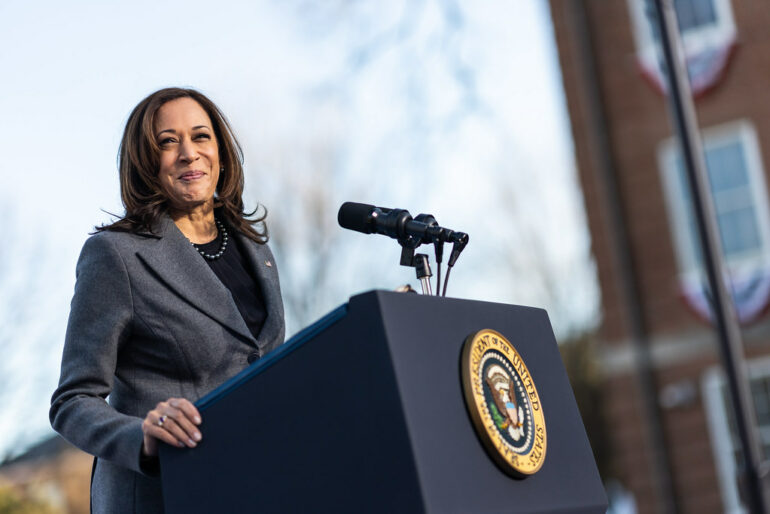 Kamala Laughs at Refugees in Warsaw

During her trip to Poland to represent the United States in discussions about the Ukrainian-Russian War with our European allies, Vice President Kamala Harris made yet another stunning gaffe. Harris responded with a laugh to a question about the refugee crisis that has stemmed from the war in Ukraine. It wasn’t quite clear what the Vice President thought was funny about 2.3 million mostly women and children fleeing the death and destruction of their homeland.

Laughing loudly, Harris said, “A friend in need is a friend indeed.” after receiving the question as Polish President Andrzej Duda uncomfortably looked on. When the revelry passed, Duda affirmed that he had asked Harris to help hasten the consular process so Ukrainian refugees with family in America could stay with them. She was not asked why she felt the situation was a joke.

For her part, Harris said the two leaders discussed the crisis happening in Poland but would not say if the United States would take in Ukrainian refugees.

The New York Post detailed the responses to Harris’s chortling.

“’It would be a tragedy if this woman won the presidency,’ Iuliia Mendel, a former Zelensky spokesperson, said in a quote tweet responding to a video of the interaction. She later deleted the post after backlash.

‘Kamala Harris has been very consistent during her live remarks with Poland’s leader,’ said former Donald Trump campaign aide George Papadopoulos. ‘She is awkwardly laughing. Again. Discussing refugees is no laughing matter. Why she laughs at this is deranged.’

‘Nothing about any of this is funny,’ added Fox News senior meteorologist Janice Dean.

This is not the first time Harris has been criticized for laughing at an inappropriate time. In August, Harris cut off a question from reporters about the botched US withdrawal from Afghanistan by saying, ‘Hold on, hold on — slow down, everybody’ before dissolving into giggles.”

Harris also laughed in January when asked about the White House’s failures in responding to the pandemic. As war rages in Europe and inflation causes a spike in the price of gasoline and food, I guess we can all take comfort in the fact that the vice president is having fun hobnobbing with other leaders and traveling around the globe.

[READ NEXT: Biden Looks to Enemies for Oil]