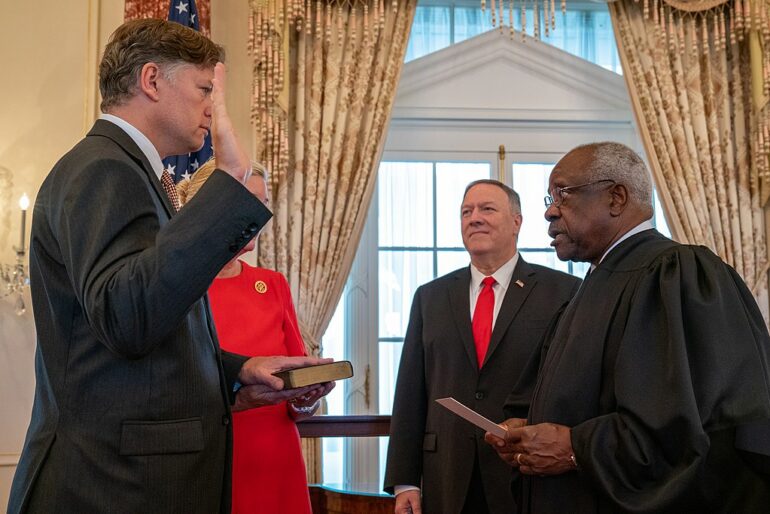 U.S. Secretary of State Michael R. Pompeo Participates in the Swearing in of U.S. Ambassador to Mexico Christopher Landau on September 13, 2019 at the Department of State [Photo Credit: U.S. Department of State from United States, Public domain, via Wikimedia Commons]
EntertainmentNewsPolitics

Supreme Court Justice Clarence Thomas is strong in his convictions, and has the background to back it up, but that wasn’t enough for failed CNN+ host Rex Chapman who went on a “racist” tirade against the judge.

The Daily Wire reports that Chapman drew the response of critics who slammed the host for attacking Clarence Thomas racially for exercising his free will, and doing his job as a Supreme Court Justice.

Chapman previously played in the NBA, was a drug addict, and convicted criminal before getting a show with CNN+.

The attack started with an attack on Thomas’s attendance at the graduation of Christendom college students.

Interestingly enough Chapman used a former president, who is white as ammunition against Thomas.

As did Zaid Jilani:

But there was a tweet that probably was the worst as CNN political commentator Scott Jennings pointed out:

The tweet by Chapman was in reference to his belief that Senate Majority Leader Mitch McConnell wants to replace Thomas on the court with current Kentucky Attorney GeneralDaniel Cameron, because of the similarities of their wives.

[READ NEXT: Rogan Makes His 2024 Endorsement]