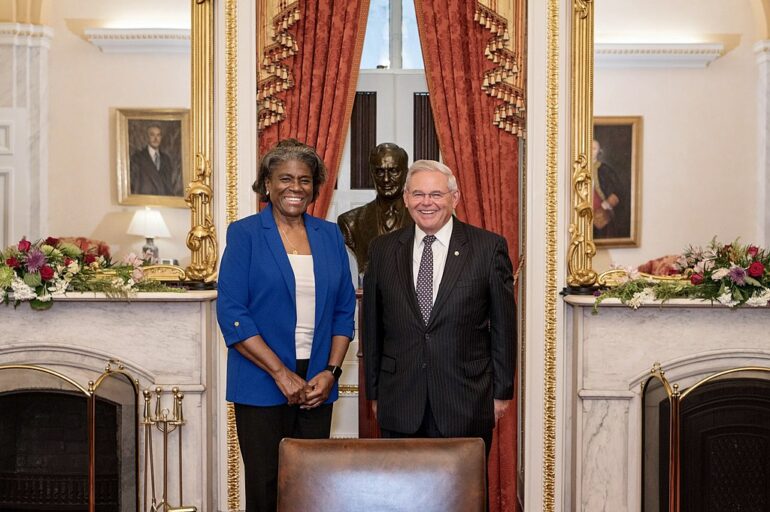 A new report from The Daily Beast is shedding light on a plot from Democrat Senator Bob Menendez (D-N.J.) to install his son into Congress.

Representative Albio Sires (D-N.J.) is retiring from a seat previously held by Menendez from 1993-2006 and Menendez has decided that his namesake must replace him.

Robert Menendez Jr. already has secured the backing of the Congressional Hispanic Caucus PAC, the endorsement of New Jersey Governor Phil Murphy (D) before even announcing.

Even the local machine the Hudson County Democrat org has backed him while kicking two Democrat opponents off the ballot.

The younger’s impending coronation (in such a Democratic district that the November election is a formality) has rankled local editorial boards and progressive activists alike.

“People in Hudson County have become very cynical about how politics operate here,” warned Hector Oseguera, a lawyer based in Union City—the senator’s hometown—who challenged Sires in 2020. “Something like this feeds into that perception of politics: that the people who are ruled by these politicians don’t have a say because there’s a club that makes all these decisions.”

But the royal treatment might not so appall the son, who appears to have been prepped for power from an early age. The scion attended the private Hudson School in Hoboken, where tuition and fees top $25,000 a year, more than half the average Hudson County resident’s annual income. His LinkedIn profile shows he graduated straight from Rutgers Law in 2011 into Lowenstein Sandler, a white shoe firm known for its politically connected attorneys, who have included several current and former attorneys general of New Jersey and Biden Drug Enforcement Administrator Anne Milgram. Its clients are often private firms with business before the state. Lowenstein Sandler also belongs to a limited pool of legal outfits approved to serve as counsel to New Jersey and its municipalities.

Menendez is known to blurr the lines of corruption and was even charged with it in 2017 before ultimately being acquitted. But his son’s firm is his largest donor and was the largest contributor to his legal defense fund.

In 2018, NorthJersey.com identified Lowenstein Sandler as the senator’s single largest financier during his congressional career. The site also reported the firm was among the biggest contributors to his legal defense fund, which helped Menendez Sr. fend off federal bribery charges in 2017.

Menendez seemed to foreshadow this after escaping corruption charges in 2017.

And now Menendez is looking to expand his political power in a region he has been trying to control since he was put on trial for corruption on 2017.

[READ NEXT: Investigation into Hunter Biden Heats Up]