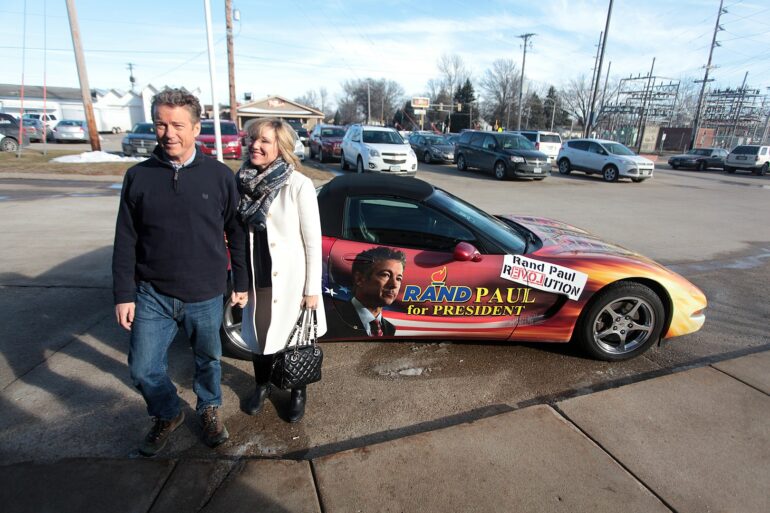 U.S. Senator Rand Paul and Kelley Paul with the Rand Paul car at his "Race to the Finish" rally at the National Sprint Car Hall of Fame & Museum in Knoxville, Iowa. (Photo Credit: Gage Skidmore)
Politics

A Senator Rand Paul Covid Investigation might be coming to the Senate this January.

According to the AP, Senator Paul promised to “wage a vigorous review into the origins of the coronavirus if Republicans retake the Senate and he lands a committee chairmanship.”

Paul, an eye surgeon, currently serves on the Committee on Health, Education, Labor and Pensions.

Should Republican’s win the Senate in November he likely to become the committee’s chair and will have the ability to conduct the investigation:

“When we take over in November, I will be chairman of a committee and I will have subpoena power,” Paul said. “And we will get to the bottom of where this virus came from.”

Further, during his campaign rally in Kentucky, Paul also celebrated a Florida judge’s order to void the mask mandate on airplanes.

“Last week I was on an airplane for the first time in two years and didn’t have to wear a mask,” he said, drawing cheers from the partisan crowd. “And you know what I saw in the airport? I saw at least 97% of the other free individuals not wearing masks.”

CNN Reporter Blasts Biden for Not Visiting Migrants at the Border

Lastly, in an interview with Fox News earlier this week, Sen. Paul said Dr. Anthony Fauci should not be allowed to be part of a new WHO-led Covid investigation:

Here’s the problem. The WHO investigated this the first time, we suggested three people to send to China. They rejected all three and they accepted a guy named Peter Daszak who was the one that funded the lab. So you can’t have the people—like Anthony Fauci or Peter Daszak—who are part of the funding mechanism to send these funds to Wuhan lab. You can’t have them investigating themselves. They have a definite conflict of interest because if this pandemic started in a lab that the U.S. was funding, the people advocating for the funding obviously will have culpability—at least moral culpability…

A Senator Rand Paul Covid Investigation may not be far off. Republican’s are in a good position to pick up some seats in the Senate.

[READ NEXT: Two Fox News Stars Get Into Heated Battle]