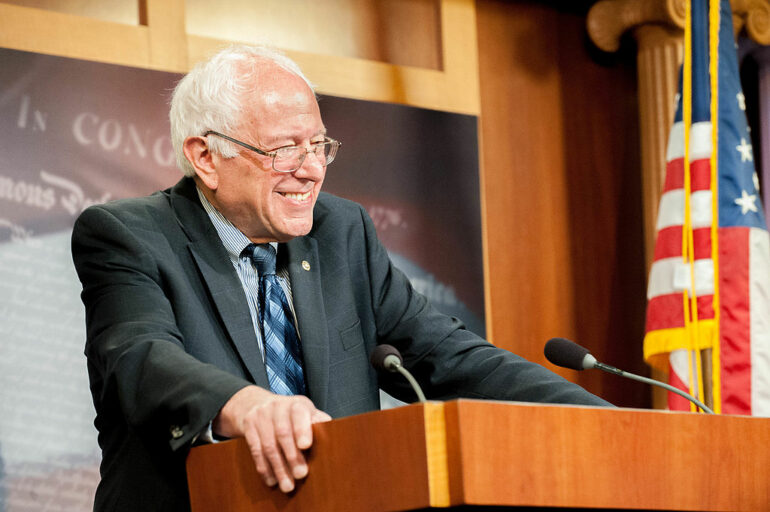 As a result, progressive politicians are feeling the squeeze to explain why the federal government’s money printing and deficit spending aren’t to blame. And if Bernie Sanders’ latest radical proposal is anything to go by, some of them are getting pretty desperate.

The Vermont senator just unveiled a proposal for a 95 percent tax—yes, 95 percent!—on business profits above their pre-pandemic levels. This comes as part of his larger attempt to blame corporate greed and “price-gouging” for inflation.

“The American people are sick and tired of being ripped-off by corporations making record profits, while working families pay absurd prices for gas, rent and food,” Sanders said in a tweet alongside the news. “The time has come for Congress to work for working families and demand that big corporations pay their fair share.”

Here are some of the details of the senator’s plan.

“Companies would pay the current 21% corporate tax rate on earnings up to the amounts they recorded before the pandemic, and then have to pay a 95% rate for profits above those levels,” Bloomberg explains. “The total tax is capped at 75% of a company’s income in a single year. The levy would only apply to corporations with at least $500 million in annual revenue.”

Here are three big problems with this radical and misguided proposal.

1. It Doesn’t Address the Actual Problem

Corporate greed and “price gouging” are not, in fact, the reasons behind the current surge in prices that is hitting Americans so hard. As economist Brian Riedl noted, oil companies, for example, are no less “greedy” or “profit-seeking” today than they were in May of 2020, when gas prices fell below $2/gallon.

Were they just feeling super generous then and extra greedy this year? Of course not.

Economists across the political spectrum have dismissed Sanders’ nonsensical notion out of hand. An IGM Chicago survey found that, weighted for confidence, 80% of economists disagreed with this explanation for inflation.

So, it’s a textbook example of something that causes a decrease in supply. What happens when supply goes down? You guessed it: prices go up.

“By lowering profits, this policy would discourage businesses from investing in the creation of new technologies for increasing the supply of oil,” FEE economist Peter Jacobsen explains. “[It also] could incentivize companies to move business operations outside of the US.”

“For the[se] reasons, a tax on profits will likely lead to a lower supply of oil,” he said, using one example of an industry that would be impacted. “Other things equal this will mean higher prices at the pump.”

Senator Sanders wants to respond to the high inflation the government’s meddling caused with… more government meddling in the market. Is it really a surprise this would only backfire?

3. Profits Are Actually a Good Thing, Not Something to Punish

Sanders’s plan is also misguided in its very nature, by targeting profits when they’re actually something to be celebrated.

“[One thing] the Left doesn’t seem to get about the market economy is the huge risks, that businesses earn both profits and losses,” Edwards told FEE. “Companies get denounced for high profits, but companies that lose money also get denounced as poorly managed. The reality is that over time, returns are equalized across industries to normal levels as investment flows to winners and away from losers. And if the government doesn’t stand in the way, competition eats away any above-normal profits.”

“Profits are beneficial as they signal where investors should put resources to benefit the nation’s economic growth,” the economist added.

“Workers do better as resources flow over time to profitable firms and productivity rises.

Most profits are reinvested to expand businesses, which helps workers.”

“The Sanders plan would steal more profits from companies, leaving less for reinvestment and reducing opportunities for workers,” Edwards concluded.

The Takeaway: A Bad Idea Rooted in Class Warfare

There’s simply no defending Sanders’ radical new plan on its merits. Taxing business profits at 95 percent, even only above a certain threshold, is obscenely unfair, economically illiterate, and totally off-base when it comes to actually addressing inflation.

What’s really driving this proposal is not substantive policy considerations, but Bernie Sanders’ deeply ingrained propensity toward class warfare and envy. While it might make for effective political pandering, that’s no way to run a country.