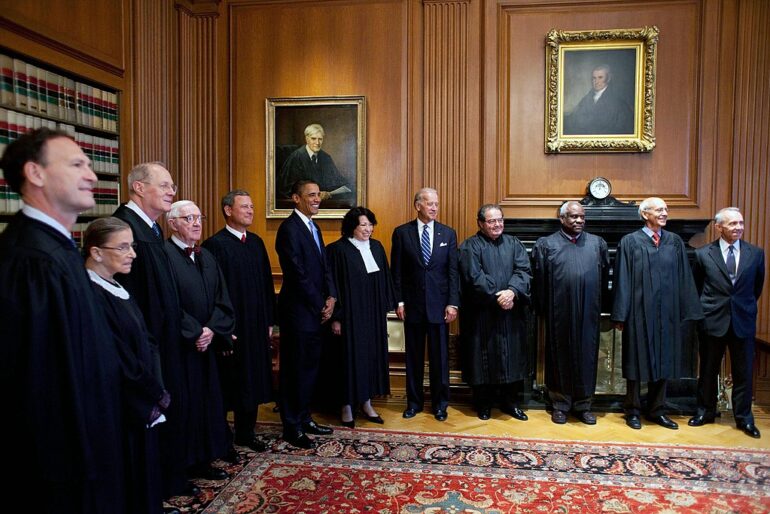 President Barack Obama and Vice President Joe Biden meet with Supreme Court Justices prior to the investiture ceremony for Justice Sonia Sotomayor, at the Supreme Court in Washington, DC, Sept. 8, 2009. From left: Associate Justices Samuel Alito, Ruth Bader Ginsburg, Anthony M. Kennedy, John Paul Stevens, Chief Justice John Roberts, President Obama, Associate Justice Sonia Sotomayor, Vice President Joe Biden, Associate Justices Antonin Scalia, Clarence Thomas and Stephen Breyer, and retired Associate Justice David Souter. (Official White House Photo by Pete Souza)..This official White House photograph is being made available only for publication by news organizations and/or for personal use printing by the subject(s) of the photograph. The photograph may not be manipulated in any way and may not be used in commercial or political materials, advertisements, emails, products, promotions that in any way suggests approval or endorsement of the President, the First Family, or the White House. via the White House
Politics

Liberal Supreme Court Justice Stephen Breyer has announced that he will retire.

The retirement is seen a a big win for President Joe Biden and liberals, giving Democrats the opportunity to replace the liberal justice.

Breyer, who is 83 years old is the most senior member of the liberal wing of the court.

Progressives have been mounting a pressure campaign to get Breyer to retire while Democrats still control the Senate.

Biden has said he will nominate the first Black woman to the Supreme Court.

[READ NEXT: Palin Takes the New York Times to Court]